The Super Hoop (スパーフープ), sometimes called the Dash Hoop (ダッシュフープ) or the Hula Hoop, is a Gadget that appears consistently throughout all the Ape Escape games. It is used to travel across areas much quicker than normal. It can also be used to climb steep slopes, defeat enemies and stun monkeys.

The Super Hoop has some minor changes in its appearance throughout the series, however its consistent blue and white barber stripe pattern along with an outer golden ring remains the same with each installment.

Yumi is the only character throughout the series to possess a Super Hoop with a drastically different appearance. Hers sports small deep blue hearts along where the supports of the rings are, located in all four points north, south, east and west of the center of the ring.

To use the Super Hoop:

The Super Hoop appears as one of Spike's Attacks in PlayStation All-Stars Battle Royale, now with the name Hula Hoop. Instead of rotating the Right Analog Stick (as the Right Analog Stick are Spike's throw attacks), the player presses the Circle Button instead. Pressing the Circle Button once will cause Spike to spin the Dash Hoop once, while mashing the Circle Button will cause Spike to dash forward. However, unlike the games, you cannot freely control Spike's Dash Hoop. Another change in the Dash Hoop is that you can charge it in the air, which is impossible in the Ape Escape games.

The Super Hoop as it appears within Ape Escape 3 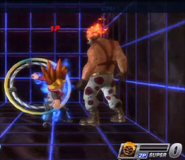 Super Hoop as it appears within PlayStation All-Stars Battle Royale 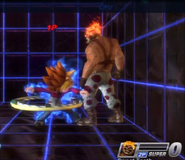 The Super Hoop in Ape Escape.
Add a photo to this gallery

Retrieved from "https://apeescape.fandom.com/wiki/Super_Hoop?oldid=12774"
Community content is available under CC-BY-SA unless otherwise noted.