Ape Escape 3, known in Japan as Saru Get You 3 (サルゲッチュ3), is the third main installment of the Ape Escape franchise released on the PlayStation 2.

The story begins when Specter, the leader of the Pipo Monkeys, allies himself with the human scientist Dr. Tomoki to aid him in his evil plans. They establish TV stations protected by the Freaky Monkey Five where they plan to broadcast Specter TV worldwide. The shows that are broadcasted put every human on the planet except for the twin protagonists Kei, Yumi, their aunt Aki, and Natalie into a mindless trance. When Natalie informs Kei and Yumi that Spike, Jimmy and the Professor were all infected by the TV show, they go out to catch the monkeys and thwart Specter and Dr. Tomoki.

Their mission is to go to every movie set, capture all the monkeys in it, and destroy the satellite there. Kei and Yumi easily capture White Monkey, Blue Monkey, and Yellow Monkey. When they reach the TV Station where Pink Monkey is, Kei and Yumi's attempts to capture her fail and she escapes. They manage to capture Red Monkey afterwards.

When they reach Tomoki City, Tomoki challenges them to a battle in his giant Tomo-King robot. Following his defeat by Kei and Yumi, and being humiliated by Specter and defended by the children, he changes alliances to help the heroes and takes them to space to defeat his former partner. Once they reach Specter's outer space base of operations, Space Station SARU-3, they capture all the monkeys and deactivate the movie sets on their way to Specter. When they reach Specter, he reveals his plan of "Twin Heavens." He plans to use the arm of his space station to chop the Earth in half and keep half of it for the monkeys. As the other half was originally meant for Dr. Tomoki, he's fine with leaving that for the humans to fight over. He refuses to accept this would also destroy the entire planet.

Specter activates his plan and gets into his new King Gorillac Mech for a boss battle. After Kei and Yumi defeat and capture Specter, Dr. Tomoki reminds the twins that the Chop Rocket is still on a crash course to Earth. Dr. Tomoki hurries Kei and Yumi to escape from the satellite, assuring he will follow after stopping Specter's plan. In truth, he knows the only way to stop "Twin Heavens" is to make the Space Station destroy itself. He activates the self destruction mechanism as the twins escape.

He survived, as shown in the end credits. He reveals himself to Kei, Yumi and Aki with a robot he saved from SARU-003.

Shortly after Specter is defeated, however, Pink Monkey rereleases him and the rest of the Freaky Monkey Five. Kei and Yumi then proceed to recapture the Freaky Monkey Five and all of the remaining monkeys they had missed before. After capturing them all, Aki discovers that the Space Station SARU-003 wasn't completely destroyed and that Specter is hiding there again.

Kei and Yumi arrive soon after to find Specter strangely turning himself in. Yumi falls for Specter's lie before Kei can warn her, which leads to them getting captured. They manage to escape from their capture, beat Specter, and catch him once and for all. Afterwards, they two twins go home and get ready to go to school.

At the beginning of the game, you choose between Kei or Yumi to play as. Your choice only determines whether some monkeys are attracted to you or not, as some are in Yumi's "Fan club" and will be lovestruck at first sight. R1 and R2 are your jumping buttons, whereas the four face buttons are assigned gadgets and dictate which gadget you have equipped.

A new arrival for the Ape Escape series, Morphs allow the player to change form and gain abilities not able to be gained via gadgets. These include stronger and more varied attacks, greater movement ability, and other, more specific abilities as well.

In Ape Escape 3's main menu, if the player holds down L1, L2, R1, and R2 and presses start, a secret password menu appears which allows players to input passwords for rewards. On the Japanese version, all passwords must be input in Hiragana, even if the words they spell are meant to be written with Katakana or Kanji. 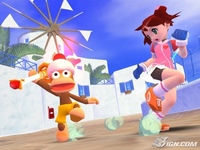 Yumi running from an Ape

Names in Other Languages[]