Ape Escape 2, known in Japan as Saru Get You 2 (サルゲッチュ 2) is the second installment of the Ape Escape franchise, and the direct sequel of Ape Escape. It was released on PlayStation 2.

This game takes place after the events in Ape Escape 2001, where Spike had stopped Specter from taking over the world. After some time had passed, the Professor had left for a vacation leaving his granddaughter, Natalie, and Spike's cousin, Jimmy, to watch over the laboratory. The Professor has left them with one task: deliver a load of monkey pants to the monkeys in Monkey Park. Jimmy accidentally sends not only the monkey pants, but some Monkey Helmets as well, wrecking the laboratory in the process. Specter gets a hold of one, and yet again makes an army of monkeys bent on ruling the world. Under Natalie's orders, Jimmy aims to capture all the monkeys and stop Specter (due to the mess-up from earlier). However, Specter has supplied five monkeys, The Freaky Monkey Five, with Vita-Z Bananas, making them stronger and more intelligent than the average monkeys.

Jimmy manages to capture all of the Freaky Monkey Five, except Yellow Monkey. Before his fight with White Monkey, Pipotchi, a baby monkey accompanying Jimmy, has been kidnapped, in order to transfer the data in his Monkey Helmet (a re-engineered model which makes Pipotchi friendly) into a device called the Lethargy Laser. Rescuing Pipotchi, Jimmy makes his way through a monkey controlled military base, and confronts Specter, who is waiting for him with a redesigned version of his battle cruiser from the first game. Before the two can battle, Yellow Monkey, now a giant monster thanks to an overdose of Vita-Z bananas attacks the facility. Specter flees, and Jimmy manages to downsize and capture Yellow.

Jimmy, the Professor and Natalie then discover the purpose of the Lethargy Laser. By firing it at the globe, all humans worldwide will lose the will to fight back, making it easier for Specter and the monkeys to take over the world. Jimmy confronts Specter at his moonbase, who attacks him with a giant robot. Once defeated, Specter attempts to fire the laser, but Jimmy states that humans will never give up, and captures him. Jimmy and Pipotchi then flee the exploding moonbase.

Shortly afterwards, Specter escapes and goes into hiding. Jimmy then proceeds to capture all the remaining monkeys before the Professor discovers Specter's hiding place. Jimmy warps there, encountering Specter, and the two of them battle again. Specter loses and is once again captured. The game ends with Spike visiting the laboratory, which is again destroyed when Jimmy accidentally crashes a spaceship into it.

Gameplay is similar to the first Ape Escape game. Jimmy can run, jump, climb, and swing on objects. Throughout the adventure, he gains several gadgets from the Professor in order to help in his monkey catching mission. Like before, Gadgets are used with the Right Analog Stick instead of the face buttons. There are also new techniques, such as a long jump.

When Entering a stage, the number of monkeys that should be captured in order to complete the stage will be displayed. However, more may be available in the stage than asked for, which means that you will need to return into the stage another time to finish it entirely. The bottom-right corner of the screen displays a group of icons indicating how many apes have been captured (a net icon) and how many must still be captured (an ape head icon). Jimmy's Health is shown by cookies, which he can gain from cookies that are dropped by enemies. His life icon is symbolized by his vest.

Coins are also different in this . Instead of the conventional 100 coins= 1 life, coins can now go over 100, and max out at 999. Coins also have a combo meter, where every 5 coins turns every coin in the stage into a 5x coin, and every 5 coins turns into a 10x coin.

Like in the previous game, Ape Escape 2 features 3 minigames. But this time, instead of being unlocked only by collecting Specter Coins, the player has to pay for them with Gold Coins, collected throughout levels, via a vending machine called the Gotcha Box in the Travel Station. However, you still need to clear a specific level in order to make those available in the Gotcha Box.

Each of the game level's are connected through the Hub world, now the Travel Station. Jimmy now has to catch 300 monkeys.

If the player has successfully complete the game and catch all monkeys, Spike can be playable on a new file. Highlight the "New Game" option on the Main Menu, hold L1 and press Start to play as Spike. In this mode, all of the Monkeys become harder to catch, but all of the Gadgets in the game become available for you at the start. There are also no cutscenes in this mode. 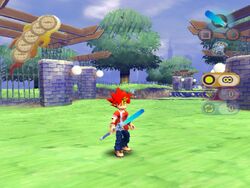 The music of the game was composed by Koji Hayama, managed by Don Makkou and Bungo Fujiwara of Two Five and data programmed by Masaaki Kaneko of Procyon Studio. The game's sound effects were created by Takashi Kanai and Junko Sano. The voice acting of the American version was recorded by Dan Rich and Jeremy Blaustein. The voice acting of the European version was recorded at Side UK on Great Titchfield Street in London, with Andy Emery serving as the voice director.

Ape Escape 2 was re-released as a PSN title in 2016, featuring trophies and upscaled graphics.