Ape Escape: Pumped & Primed, known in Japan as Gacha Mecha Stadium Saru Battle (ガチャメカスタジアム サルバト～レ) is a spin-off party game based on Ape Escape. The game was released in Japan and America for the PlayStation 2 in 2004. The game consists of a series of minigames. It is the prequel to Ape Escape: Million Monkeys.

Spike, Natalie, Casi and the Professor join a High-Tech Tournament held inside a virtual world. Helga, the previous champion, is on an important mission to find a disk based on her father's research hidden in the prize trophy. Pipo Monkeys also join the duel to win the tournament under Specter's command. Mysterious Pipotrons join the tournament as well, looking for the same disk.

The contestants find Jake, who promised to join the tournament with Spike but went under Specter's control. Jake then battles against the other characters three times in different styles on his motorbike, the last battle being against Dark Jake. Specter fights the heroes in his Goliath-robot, also three times. On the third battle against Dark Specter, the Goliath is fused to a battleship.

At the end of the tournament, the Pipotrons either steal the trophy or win it fairly and discover the disk. The Pipotrons then give it to a super computer virus called Grid Core who plans to conquer the world. Once he has the disk, the villain decided that the regular three Pipotrons were useless and left them on their own. Grid Core introduces the new Virus-Tech Tournament, where the characters are fighting for their very lives while getting closer to Grid Core. Along the way they go against Super Pipotrons who are 100 times more powerful than the original ones as well as metallic copies of themselves and the Pipotrons. When the heroes reach Grid Core, they defeat him, and the virtual world turns back to normal.

Unlike previous Ape Escape games, Pumped & Primed is a multiplayer party game with up to four players competing in various minigames. The games include arena battling with either melee- or ranged weapons, foot racing while using Sky Fliers and collecting coins, underwater battles using submersibles, tank fights, racing R.C. cars to collect the most coins, boat racing, and boss battles. Every character has their own equivalent to the usual gadgets.

You cannot play against bosses or in the Virus-tech World in Versus mode, and you can only use up to four gadgets in mini-games that allow them.

Doing exceptionally well in mini-games wins prizes from fans, which are monkeys from previous Ape Escape games. 3rd place prizes are Fan IDs which tell you about the monkey sending the prize for that mini-game. 2nd Place gets a fan letter from the monkey. 1st Place prizes are presents that can contain new outfits, gadgets, vehicles, and the monkey who sent it as a Summon. These can be equipped in the Customization Mode for every character excluding Jake, but are separated per character. Gaining the prizes for one character does not unlock them for every character.

The Summons are used to help you win battle mini-games and use up some of the special bar when activated. They can do things like heal you, cause a sandstorm, attack the opponent directly, and more. Most summonings can only do one thing and you can only have one summon at once. Some of the summons include the Freaky Monkey Five as well.

After the Subfinals, you can use Special Attacks by combining buttons next to each other. Each character has different specials depending on what gadgets are equipped. For example, the Pipo Monkey gets help from other Yellow Monkeys, Team Monkey can summon a Monkey UFO, Casi places status effects on opponents and can stop time, and Spike uses various Stun Club techniques.

After beating Story Mode once, you can use any gadget in minigames where you would normally be forced to use a specific gadget.

The characters that the player starts with at the beginning of the Game.

These characters are unlockable. They cannot be played during Story Mode and can only be played in VS mode.

Characters who aren't playable in any shape or form.

There are five gadgets available, each with a similar function to other entries. Each character uses all of them differently from design to unique tactics. The gadgets are:

All gadgets come with 3 different elemental versions to unlock: Ice, Fire, and Thunder. Ice stops enemies on hit, fire does extra damage and knockdown, and thunder disables opponents' use of gadgets.

For the first time in the series, vehicles are considered Gadgets. The Vehicle Gadgets are:

These Gadgets can only be used for their respective modes and only have one available element, ice.

Players can equip new clothing onto characters. This only has an aesthetic change, and doesn't give you any status boosts. There are 20 different costumes for every character.

Note: To input Kanji, go to the third tab of the password screen and search by the hiragana in [brackets].

While you can't capture monkeys in this game, you can view monkeys in the style of a Monkey Book. Each monkey has certain requirements to unlock their photo, their letter, and their gift. Alternatively, every monkey has a password to get all of those without question. 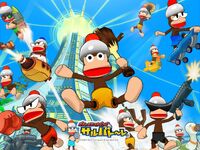 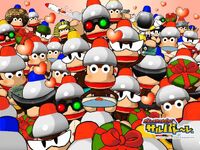 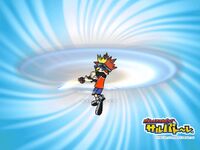 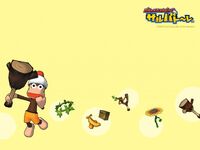 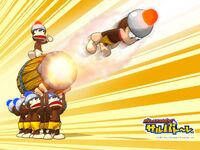 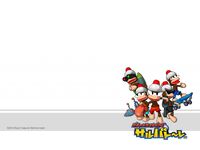 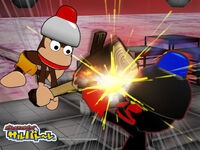 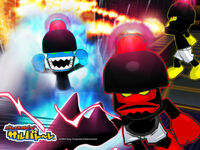 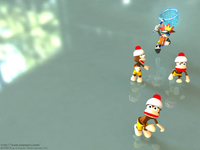 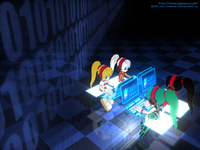 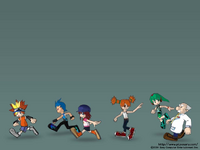 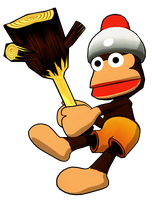 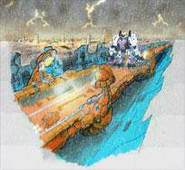 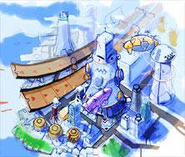 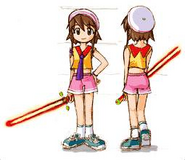 Concept art with all of the characters (excluding Dark Jake and Dark Specter).